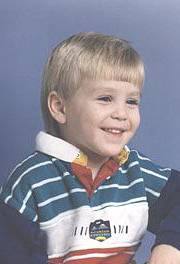 Derrick Robie     Eric Smith admitted to his grandfather that he had killed Derrick several days later. Like Edward Kindt, Eric Smith was sentenced to the maximum juvenile sentence for second degree murder in New York State- only 9 years to life.  He was sentenced in 1994, and in June of 2002 Smith became eligible for parole. He was denied.  If “Penny’s Law” had been in place at the time of this murder, Derrick’s family would still have 10-15 years before having to worry about Eric Smith being paroled; however, now they will face parole hearings every two years until the day Smith is released from prison.

On August 2, 1993, Derrick Robie was murdered by 13-year-old Eric Smith in Savona, NY. Derrick was 4 years and 10 months old.  He was walking the 100-yard walk to a summer recreation program he had attended all summer. Eric Smith rode past him on his bicycle and then turned around to approach him. Smith knew Derrick from the summer program having played checkers, kickball, and baseball with him. Smith convinced Derrick to take a shortcut through a wooded area. “You’ll be ok, I’m right here,” Smith told Derrick, and then hid his bike in tall grass so nobody would know they had walked through there. Letting Derrick walk in front of him, Smith wrapped his arm around Derrick’s neck and picked him up off the ground until he passed out. Smith then picked up a 26-lb. rock and dropped it on Derrick’s head several times. He then sodomized Derrick’s body with a stick.  Derrick’s body was found around 4:30 that afternoon by volunteers that helped search that day.