In 1958, nineteen-year-old Charles Starkweather was desperate. Desperate to marry his jailbait girlfriend. Desperate to make some money for himself so he wouldn’t be broke every day of his life. Desperate to get out of the Nebraska town where everyone had figured him for a loser. He and Caril Fugate embarked on a murder spree that horrified the country. This was the country that had elected Eisenhower and Nixon for a second term in 1956 and where the FBI’s J. Edgar Hoover was firmly entrenched as the national policeman. This was also a country that was undergoing unsettling cultural changes. Frightening and offensive symbols of rebellion emerged and thrived: Elvis Presley, James Dean and the whole rock ‘n roll culture focused on a new generation that challenged the status quo of the sterile 1950’s. They murdered 11 people. They were arrested in 1958. Starkweather was executed 17 months later. Fugate served 18 years in prison.

The country that uncomfortably watched James Dean’s Rebel Without A Cause in 1956 suddenly saw a Dean-like figure in Charles Starkweather to make them really uncomfortable. What was the world coming to? Were the violence and the alienation of Starkweather just the beginning of some uncontrollable trend that would destroy the fabric of society? Perhaps, but it would take longer than anyone then expected. The cinematic embodiments of the Starkweather murder spree took a long time to hit the market and did not take hold as a genre for over 35 years. By then, Starkweather and Fugate are merely smudged antecedents, unrecognizable as a direct characters — present only in their angst and isolation. This frightening rebel twosome inspired a whole series of mainstream and not-so-mainstream movies like the 1974 Badlands of Terrence Malick, Wild At Heart by David Lynch, Quentin Tarantino and Tony Scott’s 1993 True Romance, Dominic Sena’s 1993 Kalifornia, and Oliver Stone’s 1994 Natural Born Killers.

Read the Wikipedia entry on this infamous case of teen killers who thought they were so bright, and could commit the “perfect crime” for the “thrill” of it.

Here is how Wikipedia reports their “motive” for killing Bobby Franks, the 14 year old innocent victim :

“Leopold, age 19 at the time of the murder, and Loeb, 18, believed themselves to be Nietzschean supermen who could commit a “perfect crime” (in this case a kidnapping and murder). Before the murder, Leopold had written to Loeb: “A superman … is, on account of certain superior qualities inherent in him, exempted from the ordinary laws which govern men. He is not liable for anything he may do. “The two were exceptionally intelligent. Nathan Leopold was a child prodigy who spoke his first words at the age of four months; he reportedly had an intelligence quotient of 210, though this is not directly comparable to scores on modern IQ tests. Leopold had already completed college, graduating Phi Beta Kappa, and was attending law school at the University of Chicago. He claimed to have studied 15 languages, was able to speak four, and was an expert ornithologist. Loeb was the youngest graduate in the history of the University of Michigan and planned to enter the University of Chicago Law School after taking some postgraduate courses. Leopold planned to transfer to Harvard Law School in September after taking a trip to Europe. Leopold, Loeb, and Franks lived on the south side of Chicago, in Kenwood, which was at the time a wealthy Jewish neighborhood. Loeb’s father, Albert, began his career as a lawyer and became the vice president of Sears and Roebuck. Besides owning an impressive mansion in Kenwood, two blocks from the Leopold home, the Loeb family had a summer estate, Castle Farms, in Charlevoix, Michigan. Leopold and Loeb met at the University of Chicago as teenagers. Leopold agreed to act as Loeb’s accomplice. Beginning with petty theft, the pair committed a series of more and more serious crimes, culminating in the murder.”

They were both sentenced to life and were, at that time being under 21, technically minors. So they were, in line with this website’s founding organization, “juvenile lifers”. But they did not serve life sentences.

These two horrifically evil human beings thoroughly illustrate, of course, that they were indeed very grown up and entirely culpable in what they did. Loeb was murdered in prison at age 30. Leopold ultimately got out of prison, and died in Puerto Rico in 1970.

William Heirens, the notorious “Lipstick Killer” who in 1946 confessed to three horrific murders in Chicago and then spent the rest of his life — more than 65 years — in prison despite questions about his guilt, was found dead on Monday in the Dixon Correctional Center in Dixon, Ill. He was 83. 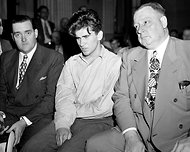 William Heirens, center, in a Chicago courtroom in July 1946. 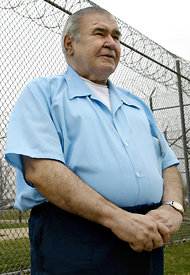 Mr. Heirens served more than 65 years in prison in Illinois.

He was pronounced dead at the University of Illinois at Chicago Medical Center, where an autopsy was to be performed, the Cook County medical examiner’s office said. Mr. Heirens was known to have had diabetes.

Mr. Heirens’ notoriety stemmed from the separate killings of two women, Josephine Ross and Frances Brown, in 1945. At the scene of the second murder, that of Miss Brown, someone had used lipstick to scrawl on a wall: “For heaven’s sake catch me before I kill more. I cannot control myself.”

The reports of a “lipstick killer” terrified Chicago as the press took note of other unsolved murders of women. Then, about two weeks after the Brown murder, on Jan. 7, 1946, a 6-year-old girl named Suzanne Degnan was discovered missing from her bedroom at her North Side home. A ladder was found outside the window. The police later determined that the killer had strangled her and taken the body to the basement of a nearby building, where it was dismembered. Her head was found in a sewer; other body parts were found scattered about the neighborhood.

The newspapers called the killing the crime of the century, and though the police questioned a parade of suspects, there was no arrest.

Almost six months later, Mr. Heirens (pronounced HIGH-rens), a 17-year-old student at the University of Chicago, was apprehended at the scene of a burglary in the girl’s neighborhood. The police charged him with the murder after determining that his fingerprints were on a $20,000 ransom note that had been left behind at her home.

The offender as a college age teen at his trial:

A reporter who covered the crime said, “Heirens was a sexual psychopath who would split off to another self to do things William Heirens didn’t dare do. Heirens called his evil self “George Murman,” which meant “Murder Man.” He often said he had sent George to Mexico, because George was a bad boy. Heirens/Murman did three bizarre murders, Heirens was a serial signature killer. A gamy part of his signature: he used defecation to assert dominance over his victims; Heirens defecated at his crime sites, to say, “I poop on everybody.” Another part of Heirens’ signature: he left messages at the murder sites; this wasn’t a game; it was compulsion.Heirens’ MO varied, but he used a knife and a tub in all of his murders. This begot a Heirens quirk: he put gauze on wounds of his dead victims. Suzanne Degnan was Heirens’ final murder victim. The Degnan episode was Heirens’ masterwork. He cut Suzanne into pieces. He washed and drained Sue’s pieces free of blood. He shampooed her hair . . . carried the pieces outside, and . . . .”

ED NOTE – too gruesome to continue – we do not need to glorify the work of the Lipstick Killer here on this website.