In loving memory . . .with Gratitude from NOVJL to her husband Daniel Horowitz, who serves as our our NOVJL President.

See Daniel’s interview on MSNBC with some of the story. Daniel for the first time publicly recounts the day of his wife’s murder on YouTube.

More on the vicious crime at About.com

From media reports:
“Oct. 15, 2005, Pamela Vitale was bludgeoned to death. She was a former high-tech executive, mother of two and wife of prominent criminal defense attorney Daniel Horowitz. Autopsy reports indicate Vitale suffered 26 head wounds, broken fingers and dislodged teeth. Her body was bruised and battered. She suffered a gaping knife wound to her abdomen, exposing her intestines. A symbol that resembled signature marks on the teen’s artwork was carved onto her back.

“‘The symbol carved into her back by you showed you were proud of your work,’ the judge said Tuesday. Before he left the crime scene, Dyleski took a sip from Vitale’s water bottle and washed his knife in the bathtub, leaving behind bloody smears. A black face mask, gloves, shirt and trench coat – which were later found in Dyleski’s duffel bag – were stained with a mixture of his and Vitale’s blood. The teen also left his shoeprint at the crime scene, and evidence of his DNA was found on Vitale’s foot. Daniel Horowitz came home from work that evening to find his wife’s body bloodied and curled up in a fetal position by the door.

“‘What I thought and what I felt when I walked in that house was almost a party of blood,’ Horowitz said Tuesday in his statement.

“‘He beat her again and again and took pleasure in it,’ Horowitz said, asking the judge to show the same lack of mercy to the boy who showed his wife no mercy or humanity. ”

Read an article about the incredibly brutal crime, the trial, and the offender’s sentence.

Watch Daniel Horowitz discuss the crime and the issue of the sentence for the offender in detail on YouTube: 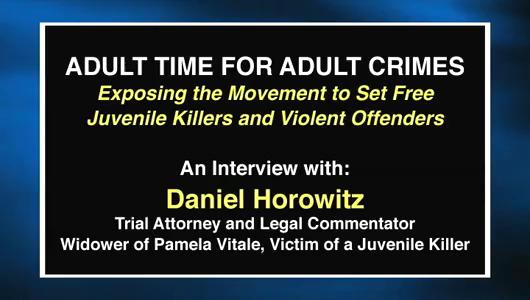