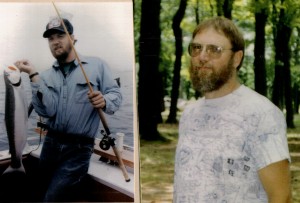 On November 28th 1995, the day before Thanksgiving, Christopher Mitchell a 17-year-old man killed my son Steve age 44 just for a “thrill”. |

On that day Mitchell met my granddaughter’s school bus. This was about three hours before Steve and his wife would be home from work. He stated to my grand daughter that he had a “need” to kill someone and asked my grand daughter to help him kill both her parents, take their money, car & credit cards and go all over the country. Telling her they would go wherever she wanted to go. This boy often talked about doing weird things and my grand daughter paid him no attention and certainly did not take him seriously.

About an hour before he met my grand daughter at the bus he broke into his dad’s gun cabinet and took a 20 gauge pump action shot gun and some buck shot shells and jumped on hid ATV and drove about two miles to my son’s house. When my son and his wife got home from work at 4:30pm my daughter in law and granddaughter headed off to the store in town to buy some drapes. When they left Christopher Mitchell got on his ATV and left too but the minute my daughter in-laws car was out of sight he turned around and went back to the house.   When Mitchell got back to the house he grabbed his gun loaded it with the buckshot and racked one in the chamber then knocked on the door. Steve, who was home getting things together for a hunting trip the next day. Steve answered the door and was asked by Mitchell if he would look at his shotgun because it had been malfunctioning. Mitchell had the chamber of the gun open so it looked empty and Steve told him to follow him downstairs to the basement workshop where he worked on his sporting equipment and he would take a look. When they got the basement Mitchell racked a shell into the chamber and shot Steve in the back from only 6 feet away. Then as Steve lay on his basement floor Mitchell racked another shell and shot him in the head from two inches away this time and this shot killed Steve instantly.

Realizing he had no means of leaving the area Mitchell grabbed Steve billfold and went upstairs where he found $100 in coins which were rolled with Steve’s name and address on them. Altogether Mitchell made off with $170.00. He then went to a friends house and no one was home so he went in and dialed 911 and told them he had accidentally shot a killed someone. The dispatcher got Steve’s address and sent out the State Police one to Steves house the other to the location of Mitchell. State Police Sergeant Wellman told me later that they got to the house where Mitchell was and he was crying and sobbing you could hardly understand him while the officer questioned Mitchell a call came from the trooper that was sent to Steve’s house telling them that Steve had been shot twice, once in the back and once in the head when the sergeant questioned Mitchell how this was a accident when Steve had been shot twice and with a pump action shotgun he would have had to rack the second shell into the chamber in order to shoot again.

Sergeant Wellman said it was like Jackle and Hyde he went from sobbing to bragging about how he killed Steve. While waiting in the county jail in Saginaw Mitchell wrote a letter to his friend, which was turned over to the prosecutors office. In this note Mitchell explained what a thrill a “RUSH” he got out of killing Steve. It took over a year for the trial at which time a videotape was shown of the interrogation and confession of Mitchell. It shows Mitchell demonstrating how he shot Steve and him bragging about it.

My wife developed cancer towards the end of the trial and because of the stress and hardship of going through loosing a son her Oncologist felt that the chemo treatments were not working, as they should because of her grief. And the cancer spread through her body and brain killing her.  To me Mitchell not only killed my son he also killed my wife.

For any judiciary committee or legislation to ever recommend the release of these murderers from prison is a slap in the face to everyone that has lost a family member, friend, or loved one to these killers. The only satisfaction we could possibly get is that there is no way these killers will ever get out of prison and will never hurt anyone again.

In loving memory from the Lanford Family