Help to prevent victimization from the Franks Foundation

www.isisdefense.us works on cold cases and helps victims families whose children have been killed in investigating the crimes.

A supporter of NOVJL writes a book on the death penalty. While NOVJL takes no stand on this important issue, the author’s concern for all victim members of NOVJL is notable and we are grateful.

VictimLaw.org – a library of information on victims rights

The Annie E. Casey Foundation puts out a terrific annual report Kids Count . We especially emphasize this well-being index because so many struggling young people often become either victims or offenders. Many times they become both. This is a cycle we have to break. It is our responsibility.

When to Punish, and When to Rehabilitate 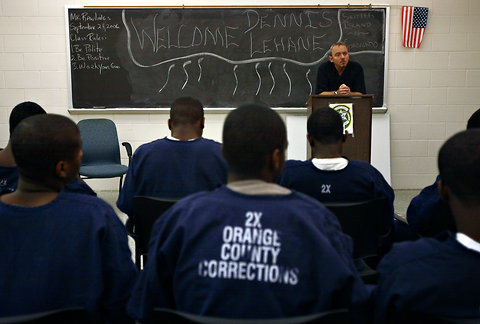 Chip Litherland for The New York Times The crime author Dennis Lehane addressed teenage inmates in 2006 as part of a reading program at the Orange County Jail in Orlando, Fla.

The Supreme Court is expected to rule this month on when, if ever, it is appropriate to sentence juvenile offenders to life without parole. The arguments this spring showed the complexity of drawing the lines between child and adult, and between justice and cruelty.

When minors commit violent crimes, should they be treated differently from adults? Is prison effective as a punishment and deterrent for juveniles, or does it harden a young person who might otherwise recover?

See the pull down tab above at LINKS to connect to victims rights groups and supporters all over the United States.

From Other Websites about Teen Murderers

Youth Violence: A Report of the Surgeon General

Juliet Hulme helped Pauline Parker kill Pauline’s mother, Honora Parker, by hitting her over the head with a half-brick in a stocking in the early 1950’s. The 15-year-olds spent five years in prison before their release. The Justice Department gave them new identities. Juliet changed her name to Anne Perry and was living as a murder mystery writer in Scotland. Parker also changed her name. She works in an Auckland bookshop and is a devoted Roman Catholic.

Kenneth Young – life sentence in Florida for his crimes

Heavenly Creatures (1994) The story concerns two girls, Juliet Hulme and Pauline Parker, outcasts who become best friends, whose bizarre fantasy life becomes more intense as their bond becomes increasingly more obsessive. When the mother of one of the girls tries to intervene and split the girls apart, they kill her and stand trial for murder in what is to this day still a celebrated and controversial case. Kate Winslet ( Titanic ) and Melanie Lynskey create two sympathetic and yet uncomfortably eerie characters in riveting portrayals. Featuring some startling and unique moments of visual brilliance as well as a disturbing love story between the two girls, Heavenly Creatures is at once both unsettling and beautiful to behold.

Innocence Lost by Carlton Stowers — Undercover officer George Raffield’s job was to pose as a student in the small town of Midlothian, Texas and infiltrate the high school drug ring. When Raffield’s cover became suspect, word spread through a small circle of friends that the young officer would pay with his life. No one stopped it. On a rainy fall evening in 1987, Raffield was lured to an isolated field. Three bullets were fired-one unloaded into his skull. The baby-faced killer, Greg Knighten, stole eighteen dollars from Raffield’s wallet, divided it among his two young accomplices, and calmly said, “it’s done.” With chilling detail, Carlton Stowers illuminates a dark corner of America’s heartland and the children who hide there. What he found was an alienated subculture of drug abuse, the occult, and an unfathomable teenage rage that exploded at point blank range on a shocking night of lost innocence…

1992 murder of Bobby Kent — A suburban high school student in South Florida who was killed by friends. On July 15th 1993, 7 teenagers from Broward County, South Florida, stabbed and bludgeoned Bobby to death – leaving the mutilated corpse to rot, in the swamp. The majority of the Broward County 7 remain in prison – one on death row.

Bully: Does Anyone Deserve to Die? by Jim Schutze –Combines natural details about the saw grass marshes and alligators south of Fort Lauderdale, Florida, with observations about the fantasy lives of teenagers hooked on surfing, steroids, and instant gratification, 7 suburban kids who slide into moral depravity. At the heart of his tale is a kind of love triangle: the “bully,” his best friend Marty, and Marty’s girlfriend, who desires to rescue Marty from a destructive friendship with homosexual undertones. Schutze’s account of the aftermath of the murder includes interesting details on how the police skillfully lured confessions from the kids involved.

VHS – Bully (2001) Marty (Brad Renfro) is a tormented surfer who relies on his longtime pal Bobby Kent (Nick Stahl) for rides to the beach and bars despite vicious abuse. But when Bobby turns his unwanted attention to Marty’s new girlfriend Lisa (Rachel Miner) and her friend Ally (Bijou Phillips), Lisa decides Bobby’s reign of terror must end. Assembling alienated suburban teens, she forms a deadly plan to get Bobby out of the way.

The neighborhood was terrified by the grisly murders, especially because the police did not have any motive or any suspects. Autopsies revealed Kimberly, 20, had been strangled with the rope found around her neck. She had also been kicked or stomped on with enough force to break 3 ribs, injure her kidneys and spleen. William, Rose, and Julia Wilson had all been stabbed in the neck and beaten on their heads. Detectives learned that 2 fringe members of the “Saturday Night Denny’s Club,” Alex Baranyi and his friend, David Anderson, both 17, had often talked about committing murder.

American Justice: Teenage Murder — One woman has been convicted twice, by the same judge, of the same crime, and has gone to jail twice. AJ recounts every step of the strange journey of Lisa Michelle Lambert in this gripping program. Hear from Hazel Snow, the victim’s mother, who says her daughter whispered “Michelle did it” as she lay dying in her arms with a slit throat and a rope around her neck. Examine the conflicting testimony that Lisa and her two codefendants have given. And unravel the bizarre web of legal decisions that have made this case into one of the most complicated in the history of Pennsylvania. Featuring interviews with the prosecutors who tried the case, the Attorney General of Pennsylvania, friends of the victim and Lisa herself.

All of the students knew Diane Borchardt, 45, as Mrs. B., motherly aide who was as sympathetic as a Girl Scout leader. The 3 boys Michael Maldonado, 15, Doug Vest, 16, Josh Yanke, 16, arrived at the Borchardt home about 3 a.m. Easter morning. Wearing new hooded sweatshirts and gardening gloves, the trio went to the door that Diane promised would be open.

Inside the dense brush and trees on an early Vermont spring day in 1981, Melissa Walbridge and Meghan O’Rourke, 12-year-old friends, were repeatedly raped, tortured, stabbed and shot with a BB gun by two assailants who had been stalking them. Melissa died beneath a musty mattress. Meghan survived to assist police in putting her attackers Jamie Savage, 15, and Louie Hamlin, 16, behind bars. Savage served no more than 3 years because law demanded he be tried in juvenile court.

When kids raise themselves — Almost a dozen 10- to 18-year-old males in Milwaukee have been or will be charged for beating Charlie Young Jr. to death with a mop, a shovel, a tree limb, bats, folding chairs, a rake, 50 to 60 times. One boy’s father says kids are just kids. A mother of 3 of the boys doesn’t believe they did anything. A sister of 2 suspects blamed the victim.

In Cold Blood – Kids today lack meaningful connections to the community – while rural life was once filled with chores and responsibilities, now kids are left alone with TV and video games – an unsupervised emptiness that can have dangerous results.

A disturbing subject—acts of lethal violence committed by “ordinary” teenagers from “ordinary” communities, teenagers who have become detached from civic life, saturated by the mythic violent imagery of popular culture, and consumed by the dictates of some private murderous fantasy.

It’s a scenario every parent fears: a teenage daughter hanging out with older guys, doing drugs and having sex. Single mother Vicki Robinson struggled to contain her daughter Valessa, and their clash eventually was transformed into tragedy. AMERICAN JUSTICE® examines the relationship between a mother and daughter to try to see why a young girl would take part in her mother’s brutal death. On June 27th, 1998, Vicki Robinson missed an early morning appointment with her best friend and an afternoon date with her boyfriend. That evening, the boyfriend called police, launching an investigation that ended with Valessa’s arrest for murder. But was she responsible for the brutal crime, or was she a victim herself? DAUGHTER DEAREST speaks with those closest to the case to find out.