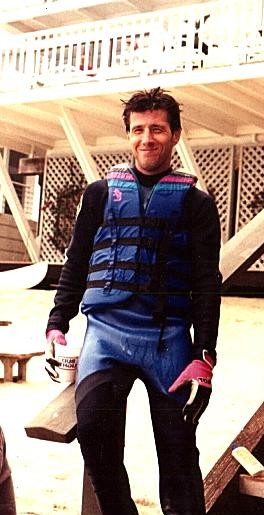 Our son, Tom was murdered on July 24, 1993 at the age of 25. Tom was attending a party near our home in Canoga Park, CA when it was crashed by a group of Gang Bangers. Unaware as to what was taking place outside Tom went out and walked into the line of fire when the murderer who was 17 at the time, fired indiscriminately into the crowd of party goers. Tom was hit twice in the chest and died at the scene. Tom was a fine young man and his love for life, surfing and snowboarding exemplified the kind of man he was. His murderer was tried as an adult and sentenced to 30 years to life and is currently in prison. Just recently we have been notified by the California Department of Corrections that Tom’s murderer will be eligible to have his first parole consideration hearing on June 5th. His mother and I plan on attending and hope we will be successful in convincing the parole board to keep his murderer in prison. Over the years I have been very active in the Victim’s Rights movement and advocacy and am following with a great deal of interest, albeit with disgust and frustration at the efforts underway to do away with LWOP sentences for juvenile murderers. In our case we knew up front that someday Tom’s murderer would be eligible for a parole hearing but I can’t for the life of me understand why there is a movement to do away with lawfully handed down LWOP sentences to the juvenile offenders that have received them when they murdered our loved ones.
Ralph & Francine Myers