Kristie, a 15-year-old honor student, was severely injured in a car accident while on her way to a high school basketball game on January 22, 2002. The accident was caused by a police car chase of 15-year-old Jennifer Corron, who had stolen her mother’s car. Kristie fell into a coma and died on January 28.

Kristie possessed a beauty that showed she was destined to care for others. With sparkling hazel-green eyes and a smile to match the sunshine, Kristie was already making a difference at her small high school. She volunteered for nonprofits, served on the student council by participating as a helper on many projects. She loved playing basketball, selling hot chocolate for the year-end trip to Six Flags, and cheering on the sidelines for Champion Christian School’s awesome volleyball team. She broke a school track record as a freshman and spent school mission days with Habitat for Humanity or doing yard work for elderly widows. In eighth grade Kristie learned that third-year Spanish students ventured into the real world of mission work. She was determined to do that in her sophomore year! With great anticipation, Kristie, along with other dedicated students and parents, helped plan and raise money for a mission trip where the students would care for children in an orphanage in Costa Rica. In fact several of her fellow students say it was Kristie’s tenacity that convinced at least one other student to participate in the trip. With heartfelt sadness for those left behind, Kristie never did realize her dream. We, Kristie’s mom and dad, received her passport in the mail just weeks after the deadly pursuit that took Kristie’s life.

Many of the junior high students wrote about how they looked up to Kristie because she was always friendly and reached out to them. She sometimes reassured the younger students that high school was a lot more fun than junior high. Everyone talks about her smile. Yes, her smile was beautiful. But it was Kristie’s warmth and tenderness that could light up a room. She was always bouncing, always excited about what was going to happen next, always happy. Champion Christian School gave us a video tape of a Chapel celebration. With friends beside her, Kristie is singing with all her heart to her Lord. Just a couple seconds on that tape reveals a young woman full of life, full of love. This is how we will remember “Our Kristie.”

Kristie continues to be an inspiration to others through her faith in our Lord and Savior Jesus Christ and in her own giving way as an organ donor. Family and friends still love and miss Kristie. Certainly, those who loved her the most miss her “spark plug” personality. 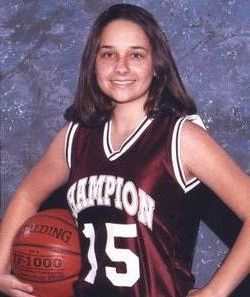 One of the most active campaigns in both California and the nation to put stricter limits on high-speed police pursuits is being conducted by the mother of Kristie Priano, the 15-year-old Chico girl who was killed when the Priano family van was struck by a 15-year-old girl who was being chased by police for taking her mother’s car without permission.

On the website www.kristieslaw.org Candy Priano, Kristie’s mother, it explains that “one minute, Kristie Priano was a 15-year-old honor student laughing with her brother in the back of the family minivan on the way to her high school basketball game. The next, she was one of hundreds who die each year across the nation in high-speed police pursuits. More than a third are innocent victims. A teen fleeing from the police plowed into the Prianos’ minivan, killing Kristie. Prior to the chase, officers knew the identity of the teen who took her mother’s RAV4 without permission. Officers violated their own pursuit policy by chasing her through a poorly lit residential neighborhood. This chase wasn’t necessary to keep others safe. In fact, the fleeing teen went home with her mother while innocent Kristie died in the hospital.”

The Priano website has gone far beyond the story of Kristie Priano’s death. The opening page provides a rolling list that names recent innocent police chase accident victims, including police themselves as well people who were not suspects of any crime and were not being pursued by the police, but who were struck by cars driven by pursuing police or the suspects they were pursuing. Included is the statistic that there have been 2,114 “blameless victims” of pursuit killed in the United States from 1982 to 2005, as well as the notation that “the National Highway Traffic Safety Administration also received reports that 87 officers have been killed during this time period. These figures, while high, are under-reported for a number of reasons, most obviously because reporting is not mandatory.”

The centerpiece of Candy Priano’s efforts to modify police chase policy is Kristie’s Law, introduced by State Senator Sam Aanestad (R-Grass Valley) in 2004 and 2005 which would, among other things, require stricter guidelines for police pursuits in residential neighborhoods throughout California and mandate that an independent agency investigate all accidents resulting from police chases. The proposed law would also loosen the restrictions on the compensation of victims of police chases.

Rashidah Grinage of Oakland’s PUEBLO says that once changes are made in Oakland’s police chase policy, “the next thing we need to work on is the reactivation of Kristie’s law,” which was last defeated in the state Legislature in 2005. “Right now, cities in California have immunity from lawsuits initiated by innocent victims of police chase crashes so long as the city has a police chase policy on the books. That’s outrageous, and it leaves innocent victims with no civil remedy. That has to be changed. We need to work on Senator [Don] Perata and Assemblymember [Sandré] Swanson to get their support for a reintroduction of Kristie’s Law.”

The 15-year-old Chico girl accused of killing 15-year-old Kristina Priano after crashing the stolen car she was driving into the Priano family’s minivan appeared in court Feb. 14, and it was clear from watching her there that she is still very much a child.

The girl, whose name is not being used because she is a minor, pleaded guilty to three serious charges: vehicle theft, evading a police officer causing injury, and vehicular manslaughter. She faces up to 11 years in California Youth Authority custody but didn’t seem concerned about that—at least in court.

The slim, blonde girl, her hair pulled into a ponytail and wearing leg chains and handcuffs chained to a belt around her waist, wore a cast on her leg—a result of the broken ankle she suffered in the accident. She smiled and laughed with her younger sister, who was seated across from her in the small juvenile courtroom, and giggled when Judge Barbara Roberts misspoke her last name.

She spoke only to confirm to Roberts that she understood what pleading guilty meant. Her parents, who sat with her sister across from her, appeared tired and listless, their eyes lined with deep circles.

Her attorney, Ron Reed, said that the girl decided to plead guilty to the charges “because she is a good girl with a good heart and feels bad about what happened. She wanted to take responsibility for her actions.”

District Attorney Mike Ramsey said that the girl had no prior record in Butte County. He explained that she was “having some trouble at home” when she planned with a 15-year-old friend to steal her mother’s small Toyota SUV and run away to Sacramento. When her mother noticed the car missing about two hours after the girls took it, she notified Chico police, who saw the car driving slowly through the Vecino neighborhood of Chico.

Several times during the ensuing slow-speed chase through the residential area, the girl appeared ready to pull over, and in fact flashed her turn signal and slowed down as if she was about to stop, said police Capt. Mike Maloney. Then she suddenly sped up to about 45 mph at the intersection of Palm and East Fifth avenues, broadsiding the Priano minivan.

The family was on its way to Kristina’s varsity basketball game. The 15-year-old Champion Christian School student suffered major head trauma, slipped into a coma and died a week later, on Jan. 28.

A sentencing hearing will be held March 13, Ramsey said. The girl will be kept at Juvenile Hall until then.

For Mark Priano, the concept of justice is newly nebulous.

He’ll never have Kristina, his 15-year-old daughter, back, but he’s hoping that somehow he can give her life new meaning, maybe some new respect, in the court system.

He’s filed suit against the city of Chico and the Chico Police Department, alleging that the agencies are ultimately responsible for the car accident that took his daughter’s life.

The accident occurred Jan. 22, when police were chasing 15-year-old Jennifer Corron through the quiet, residential Vecino neighborhood. Corron’s mother had called police that afternoon to report that Corron had stolen her car from the family driveway, and police quickly found the RAV-4 that she was driving with two teenage friends.

A short chase ensued, as Corron led two police cruisers around the neighborhood, alternating between speeding through stop signs and slowing to a near stop several times. Investigators estimate that Corron was probably going about 45 mph when she blew through a stop sign at Palm and East Fifth Avenue and broadsided the Priano family minivan. Kristina suffered major head injuries and died six days later.

Corron pleaded guilty to vehicular manslaughter, vehicle theft and evading a police officer causing injury. She is serving out a one-year term in Juvenile Hall and is also named as a defendant in the Priano lawsuit.

“There were a lot of bad decisions made that night,” he said, obviously choosing his words carefully. “Our family is very disappointed in the Chico Police Department, in the actions taken that night.”

He admits that no one in his family will ever fully recover from the sudden loss of his daughter, that “each day is a real struggle.” Although even discussing her death is difficult, he perks up some when talking about her life, about any way, however small, he can keep her memory alive.

“There’s no justice in this, because nothing I can do will bring her back,” he said. “But someone has to be held accountable.”