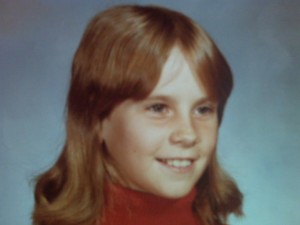 Vicki smiled all the time.  That smile was contagious and could light up a room.  On July 12, 1979, Scott Darnell murdered that smile.

Victoria Joelle Larson was born February 8, 1969.  She was brought home to a town of 500 and two siblings.  As Vicki grew she made lots of friends, good grades and because she was so tiny she could out run any kid in town.  Everyone loved Vicki . . . expect for one person.

Vicki was walking home from her brother’s Little League game when Darnell told her he had a pony for her.  She had no reason not to trust this 15 year old, as he had been to our home many times while ‘visiting’ his grandparents.  He was handsome, smart and polite telling us he had a crush on Vicki’s sister.  We had no idea of his chilling past.

He took Vicki to a spot in a corn field, where he had dug her grave 3 days earlier.  Vicki must have tried to run away when she saw the stakes and leather straps near the grave sight for she was strangled from behind with his bandana. He raped her, threw her small, lifeless body in the shallow grave.  Before his night long flight he buried his wallet, watch and murder weapon so that when found he told the police that a gang of bikers stole his things before taking Vicki.  As the county and state officers talked to him, his eyes kept going to a spot of fresh, turned dirt.  Hand by hand the police removed the dirt and found my 10 year old child.

Darnell was taken into custody and confessed to every part of the crime, but said he had heard voices, “to kill”.  It was Friday, July 13, when Sheriff Cady came to our house, they had found Vicki earlier that morning; she was dead.
His trial was held, the verdict came on Vicki’s 11th birthday, GUILTY on all counts, his insanity plea was denied.  He was to serve 30 years for the rape and natural life for the murder.

Later, his long criminal record was published;  torturing small animals at an early age, progressing, to sticking his hand down little girls panties, threatening young girls, stealing guns and leaving frightening letters, again for an under developed girl.  He used knives to scare girls and raped small girls.  He began to dig graves in the snow or plotted them in dirt.  Darnell was incarcerated in every juvenile prison in Illinois. The last time for planning another girl’s murder, he’d gone as far as digging her grave, but, that time he changed his mind and didn’t follow out the killing.  His so called ‘visit’ was a summer release, the state said he was safe to go to his grandparent’s home,  even though, he’d promised several times he would KILL!

Even 30 years later, I have nightmares, especially since I heard about the effort to free Darnell. The thought of having to face him again, perhaps many times, in a parole hearing, has been torture to me.

I can never have my child back, but I will do whatever it takes to keep Darnell behind bars, as he is a chronic pedophile and my greatest fear is if he is ever released, there will be more little girls found dead in shallow graves.