Crimes: Robbery and murder of a police officer

Murder method: Three gunshots including a close-range shot to the head

Incarceration status: Incarcerated at the Southern Ohio Correctional Facility and eligible for parole in 2021

Officer John Utlak had been assigned to an undercover investigation regarding drugs and firearms. On December 8, 1982, he went to meet two drug informants in Mineral Ridge, Ohio in the parking lot of the Gibralter Steel Corp. Unbeknownst to Officer Utlak, those informants, Randy Fellows and Fred Joseph, planned to rob him.

Fellows and Joseph arrived at the meeting. Fellows, 18, remained in the vehicle and Joseph approached Officer Utlak. Joseph, who had turned 17 a month and a half earlier, pulled out a .22 caliber handgun and shot Officer Utlak three times. One of the shots was a close-range shot to the head.  Joseph and Fellows then robbed Officer Utlak of $400, a watch, firearms, and a radio. The cop-killers left Officer Utlak to die in the snowy parking lot and fled the state. Officer Utlak’s body was found by workers the next morning.

The killers were apprehended and subsequently convicted of aggravated murder in two separate jury trials. Both murderers were sentenced to life with parole after 30 years. Joseph was denied parole in 2016 and another parole hearing was set for 2022. However, SB 256, which went into effect in April 2021, mandates that juvenile offenders be eligible for parole every five years. Because of SB 256, Joseph’s next parole hearing has been set for 2021. 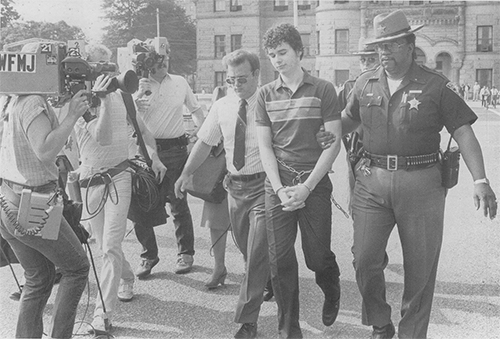 The juvenile killer of a Niles police officer in 1982 has had his parole hearing moved up because of a new state law that is giving juvenile murderers more chances at freedom.

Fred E. Joseph Jr., convicted in 1983 and sentenced to 30 years to life in the slaying of Niles patrolman John A. Utlak, will face a parole hearing this September.

Authorities originally had set a 2022 date for a parole hearing, after Joseph’s bid for parole in 2012 was rebuffed. But a new law approved by the Legislature during a 2020 lame-duck session and signed by Gov. Mike DeWine on Jan. 3 this year, states all juvenile offenders must have a chance at parole.

A grandson of a murdered 94-year-old woman at the hands of a juvenile offender said recently the new law should have been named the “Teenage Killer Protection Act.”

Now another Niles murder case is being reopened, according to Trumbull County Prosecutor Dennis Watkins, who said the new law is opening a Pandora’s box for the public.

Sometime in September, Joseph, who was 17 at the time of Utlak’s killing, will face a panel of three from the Ohio Parole Authority outside his cell at the Southern Ohio Correctional Facility in Lucasville. If the parole board rules in favor of Joseph, now 55, the prison website said he would be eligible for release on Nov. 1, 2021.

Vienna police Chief Robert Ludt, who was Utlak’s police partner, testified at Joseph’s parole hearing in 2012 with Utlak’s sister, Joanne Robbins. Ludt said he plans to go to the parole hearing in September again to testify against Joseph’s release.

“If I crawl there, I plan on being there no matter what,” Ludt said.

Joanne Robbins said every day, she mourns the loss of her brother and frets going through another parole hearing.

“Going through this parole process each time is like reliving my beloved brother’s murder and the years of heart-wrenching despair again and again,” the sibling said. “Years that were stolen from me and my family and replaced with constant grieving.”

She said she thinks of her brother every day.

“I know that I would give anything for him to be here with me,” Robbins said. “He was my best friend, my biggest cheerleader, my hero. We can’t ever fully put him to rest. There is no recovering from this tragedy, as we are always braced to fight for what little justice can be sought for this horrific crime.”

After a jury found him guilty of killing Utlak, then-Trumbull County Common Pleas Judge David F. McLain sentenced Joseph to 30 years to life in prison. A parole panel decided in 2012 to keep him in prison at least for another 10 years, until DeWine picked up his pen and signed the legislation earlier this year.

Watkins said Utlak’s mom and stepfather, Irene and Joe Sudano, and his half-sister, Joanne, have carried the torch for justice through the years.

“Surely from any review of the circumstances of the crime and the overwhelming guilt of the offenders proves Randy Fellows and Fred Joseph Jr. are in the highest category of the worst of worst offenders,” Watkins said as he contemplated writing the parole board again.

FACTS OF THE CASE

On Dec. 8, 1982, Fellows and Joseph brutally and premeditatedly robbed and murdered patrolman Utlak, 26. After committing the crime, both fled the state and were apprehended three days later in Cheyenne, Wyo.

Fellows and Joseph were both tried by Trumbull County juries in 1983 and both were convicted of aggravated murder with aggravating circumstances and received life sentences. Fellows was 19 at the time and went to trial first, followed by the juvenile Joseph.

Watkins was the lead prosecutor at both proceedings, and said Joseph was the triggerman in the Utlak murder.

“I know from talking to jurors in the Fellows case that the jury did not impose the death penalty because they knew the actual killer could not receive the death sentence — since he was a juvenile at the time of the offense,” Watkins said.

Watkins believes if both Fellows and Joseph were tried today, they would get a life without parole sentence, something Ohio law didn’t provide in 1982.

According to the letter Watkins wrote to the Ohio Parole Authority in 2012, both Fellows and Joseph had criminal histories and, in fact, had a working relationship with the Niles Police Department, especially with Utlak and his partner Ludt. Fellows and Joseph were undercover informants in the area of drug trafficking, Watkins said.

“There was trust between these police officers,” but Watkins said on Dec. 8, 1982, this trust was broken.

“Fellows telephoned Utlak requesting Utlak to bring a lot of money with him so they could make some drug buys,” Watkins wrote in the letter. “Then in an ‘in-cold-bold’-like scenario, Utlak went to a prearranged isolated parking lot located near a steel mill off Hunter Street in Weathersfield. He was approached by Joseph, who was dropped off by Fellows, who was driving his mother’s car.”

Joseph ambushed the helpless officer, Watkins said, shooting him twice in the head. The fallen officer was robbed of his money, his department-issued .357 caliber handgun, a pump 12-gauge shotgun and a portable radio. Utlak’s body was found about 6:30 a.m. the next day by a Gibraltar Steel Corp. worker.

In the commission of this murder, Watkins said the two committed other crimes — Fellows stole his mother’s 1982 AMC Ambassador; Joseph had stolen his father’s jewelry worth about $10,000.

According to an affidavit produced by sheriff’s detective Sgt. Dan D’Annunzio, the two told a relative and a girlfriend that they were leaving the area and Fellows added as he was leaving that “if a cop had tried to stop him, he would shoot him to get away.”

Both men were armed when they were last seen, first by Fellows’ sister and then by Fellows’ girlfriend.

Instead of going south, the killers went west. Both were arrested in Cheyenne: Joseph was first nabbed by police for driving erratically and shortly thereafter, Fellows was arrested at a motel. Both admitted to murdering the police officer, and Cheyenne detective Leo Pando helped recover the murder weapon that was carried by Joseph. At the trials, ballistics evidence established the link between Joseph’s .22-caliber weapon and the bullets that killed Utlak.

Among the key trial witnesses was Arthur “Skip” Krause, who was a hitch-hiker picked up by the pair of killers in Illinois. In fact, Krause testified he led the pair to where he lived in Cheyenne.

“From the conversation that I had with them, they indicated they had planned to kill the officer and to take his money … Both said that if they got caught, they would have a shootout before they would go back.”

As the discussion went on, Joseph told the hitch-hiker he would plead insanity if caught, Krause told deputies, and the authorities would go easier on him because he was a juvenile.

Fellows showed the hitch-hiker the .22-caliber revolver, an older dull silver model with one black grip because the other side was missing. Fellows said he had carved off the ends of the bullets so they couldn’t be traced. The hitch-hiker noted there were four live rounds in the gun and two spent casings. Joseph told the hitch-hiker this was the gun that he “wasted the cop with.

“He told me … that he had shot the officer because of the money that he had on him and because he had told people on the streets about their ‘narc-ing,’” Krause told deputies. “While they were telling me about this, neither one of them showed any emotion or felt sorry about this. They didn’t even seem scared. I didn’t really believe them.”

The state of Ohio director of the National Organization of Victims of Juvenile Murderers has been lobbying against Senate Bill 256 since it was made law by DeWine at the first of the year. She said the sentencing of Joseph was not a mistake.

“The murder of officer Utlak was not less reprehensible because one of the killers was under the magical age of 18,” NOVJM’s Ohio director said. “SB 256 is based on the false idea that all juvenile crimes (with the exception of triple homicides, apparently) are mistakes made due to underdeveloped brains. But the reality is that some juveniles commit horrific crimes with full knowledge of the consequences and with the intention to bring about those consequences.”