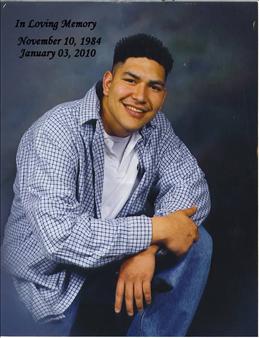 From the Father’s Victim Impact Statement:

It is said that only the good die young, I truly believe this…Eloy Conrad Duran III my son…is a man whom, anybody that knew him, if only for an instant, would see immediately, that he was a very special human being, he had the love and compassion for life like no other, he was a loving, caring, respectful, honest, trustworthy, reliable, person, he truly cared for humanity, and all living things…Conrad is 25 yrs. young, if he were alive today, he would be able to tell you himself of how he was tragically and horrifically tortured, mutilated, and then murdered…of how, in an instant, his life was taken, from this earth, from us… forever….but, unfortunately, Conrad cannot…because Jovani Muniz…ultimately, made that decision that morning to take another human beings life…taking our loved one away from us…forever….Conrad was brutally beaten, tortured, and then murdered…Conrad was murdered…savagely, without mercy, without remorse, Conrad was stabbed in the heart, Conrad was stabbed in the lung, by gang member Jovani Muniz…but before that happened, he was obviously jumped before he was murdered by Jovani Muniz…jumped by no less than 7 individuals…the word on the street is that they were gang members…who wanted my son dead, why, we may never know…my son was not a gang member, he did not live that type of life…the autopsy report says it all…My son was tortured, mutilated…he tried to defend himself, his arms raised to get away from the swords or knifes…Conrad had multiple… major cuts…on both of his arms…cuts that show the rage of Jovani…and these hoodlums…Conrads arms were sliced…all the way through his muscles and tendons, to the bone…major blunt trama to his skull, major blunt trama to most of his body…I cannot begin to imagine the excruciating, unimaginable pain and suffering that this man and his friends, thugs, put on my son Conrad, Conrad was unable to leave that place, he tried to get away, in obviously the most painful set of circumstances a human could possibly be dealt….but he only made it a few feet before he fell to his death, in a pool of blood… no man deserves to go through what my son had to go through…no one…Jovani Miuniz played god that early morning of January 03, 2010., Jovani took a life, the life of a gentleman…an honest, a good, decent, caring, giving, compassionate, god fearing, father, son, grandson, nephew, cousin, friend…of so many…

Conrad has a 5yr old daughter, her name is Desirae…she has been emotionally and phsically devasted by this, as we all are…but Conrad was Desiraes world, she has had so little time on this earth, and now, her world is gone…. she will now have to grow up without the most important person in her life…her dad…her da da…Conrad cannot be there for Desirae, for anything…anymore, all hopes, all dreams, all financial security…gone…Conrad and Desirae were inseperable…sun-up to sundown…happy, just to be with each other, he was there for her, at her every beckoning…to teach her, with loving compassion…he was the true definition of father…my son had big dreams for the both of them…Conrad was looking forward to a long, honest, fruitful life of happiness…a life filled with love and harmony…with continued solid family values…Desirae no longer has that most important person, her father, to shape her life, to teach her, to love her…as only a father can do…My family has been dealt the most agonizing, devastating, unbelievable atrosity imaginable, murder, in the first degree…and we will never be able to come to terms with what this man did…this murderous act is everlasting, unbearable…and unacceptable…and today your honor…the injustice continues…this is not justifiable murder…the very thought of Jovani Muniz getting away with murder is horrendous, and this is what we are facing here today, the YOS is not acceptable, 48 years minimum isnt enough, but it would be tolerable, … the YOS is a school, a College…it should only be for juveniles that can actually return to society, and be a productive citizen in our community…not for people who committ murder…this is not punishment, it is a blessing for him, ….he gets an education, he gets a degree…and he gets out scott free…free to kill again, free to walk the streets again, free to do whatever he wants to..again…56% of murderers who attend the YOS come out of there to continue with there feloious acts…WHAT ABOUT MY SON… how dare you …how can this court, even for a second, ponder the thought of rehabilitation…for a cowardess act of murder, this man is a monster…Jovani Muniz willfully, and maliciously, murdered my son Eloy Conrad Duran III…my son would be here today to live his life to a ripe old age…if it was’nt for the actions taken willingly, by Jovani Muniz…You must reconsider…Jovani, you are a murderer…and you must be dealt with as such….I spoke to no less than 3 people who were there at that party on 4th and Utica st. on January 03rd…when Conrad was murdered, who told me what happened…two of them were at the hospital immediately after my son was admitted…they told me my son was jumped by a bunch of gang members, tortured, and then saw Jovani Muniz stab and kill my son, …why is it that they decided to not tell the whole truth to the homocide detectives…it is because they got calls from these thugs that jumped my son, telling them that if they implicated them, then they themselves would be killed, were these witnesses offered protection…we are not doing the right and justifiable thing here…my son did not deserve any of this…my family doesnt deserve any of this, his daughter doesnt deserve to grow up without her dad…

NEWS COVERAGE of the murder:

BLOG put up by Conrad’s family:

Here is a father. He wears slacks and a dress shirt and a necktie and sits across the table from me at a neighborhood restaurant. He has before him some papers and a small digital recorder and appears to be a businessman working over a late breakfast.

Look closer and his exhaustion is apparent. His face is sallow, as if he had been sick, as if all that is holding him together are the tie and the nice slacks.

He talks about his son. About when he was a baby they called him the Michelin Man because he had so many rolls of fat. He was an athlete — baseball, football, basketball — and had a ton of friends who knew him to be generous and loyal and protective of them. The father tells you his son graduated from Kennedy High School and became a father at 20. When the economy tanked, his son lost his job and he and his daughter moved in. His son found work cleaning gutters.

The father laughs and says his son liked to hoist his little girl over his shoulder and carry her downstairs so they could all eat breakfast together.

The father says he and his son did everything together. They went fishing, to the movies, to church, and on summer evenings, they sat outside and talked. He says his son was a good man, a gentleman. The father pushes the stack of papers toward me: “The autopsy report is there.”

It goes on for nine pages. Eloy Conrad Duran III was beaten and stabbed. This happened at house party at West Fourth Avenue and Utica Street a little after 2 a.m. on Jan. 3.

Police arrested 17-year-old Jovani Muniz. The district attorney’s office charged him as an adult with first-degree murder. Muniz pleaded guilty in exchange for the lesser charge of second-degree murder. Because he had no previous criminal record, he was given a 21-year suspended sentence in adult corrections and seven years in the Youth Offender System. If Muniz does his time in the youth system without incident, he will be freed. Otherwise, he will face 21 years in adult lockup.

This is a matter of record. It is not the whole story.

Left behind is Eloy Conrad Duran II, who believes his son was set up and jumped at that party by gangsters. He believes others should be punished. He believes seven years for the life of his son does not even come close to justice.

“It’s a farce,” Duran says. “My son is dead and (Muniz) will be in YOS taking college classes.”

What you need to know about the particular hell Duran occupies is that since his son was killed, he has lost his job, he is filing for bankruptcy, and on that recorder are interviews he started conducting after the May sentencing with witnesses to his son’s death.

A young man kills another and from this act come ripples and some of those ripples are tidal waves. I sit with a father, who has at home his 13-year-old son and his slain son’s 6-year-old daughter, and I can provide no answers. The police tell me they are not looking for any other suspects. The D.A.’s office says it did not have the evidence to support the scenario Duran posits. Not the premeditation, the beat-down, the gang involvement, though Muniz may have been part of a tagging crew.

All the while, whispers reach Duran’s ears: People were drinking and your son, 6 feet, 260 pounds, was really drunk and looking for a fight and 10, 15 guys jumped him and then handed the knife to a 115-pound kid because he’d get less time.

How else, Duran wonders, could a scrawny teen take down a big man?

So, he searches for evidence to persuade police to reopen the case. He undertakes a dangerous course.

I do not presume to know his suffering. I do not know what it is to imagine my child’s final moments or to sit in a courtroom and hear the words “seven years.”

I speak to him of his younger son and his granddaughter and he says: “They are all that keep me going now. This is what I have to do. I don’t believe justice was served, and I don’t know, frankly, what to do about it.”

Listen to the recording, he says. I hear him interviewing a girl. She says she saw 10 guys surrounding his son. (Another will tell him she saw four.) “Was this person there?” Duran says. He has photos. “I don’t care about names.” But the girl is hesitant now. “I don’t know,” she says.

I hear a desperate father who forgets to stop recording after he finishes talking to the girl. I hear his footsteps and his breathing. I hear him open the car door. I hear him settle in his seat. I hear him cry.