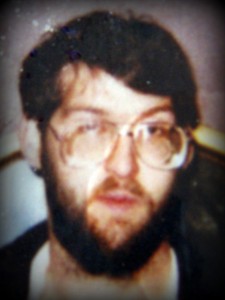 Michael Hare or Mike as he was known was just a month shy of his 29th birthday the night he was killed.  Standing over 6’6” and slender, Mike wore a beard to cover what he thought were his chubby cheeks.  Always trying to help the underdog, he had given a free cab ride to a stranger just a week prior to his death due to the bitter South Dakota cold.  The night of his murder would mark his first full month as a taxi driver.

Below you will find the facts, as determined by a court of law, as to what took place on January 26th, 1996. Paul Dean Jensen barely 14, along with another teenager, Shawn Springer, held hostage, robbed and murdered Mike Hare.

Beyond the facts are the realities of losing my brother to murder,  like knowing that the brother that would drive two hours just spend the afternoon with me had died on a freezing night pleading for his life. The reality is that as trivial as it seems, Mike who loved Reese’s Peanut Butter cups and ate two every day despite being diabetic, never gets another peanut butter cup in this life, he is gone. When ever I get into a taxi anywhere in the world, I say a silent little prayer that the driver or those who love him never know the pain and sorrow of those who knew and cared for Mike.

When people choose to take a life they leave many injured or damaged in their wake.  We, as his friends and family were given the cold comfort that Paul Jensen would spend his life in prison on October 4th, 1996, my mothers 56th birthday.

[¶ 2.] The evidence presented in the transfer hearing and at
trial disclosed the following sequence of events.   Prior to the night of the murder, Jensen had already established a troubling history of unacceptable behavior.   Though only fourteen, his experience in criminal activity already included shoplifting, vandalism, burglary, arson, stalking, and more. His record at school included excessive tardiness and absences, verbal abuse of staff and students, physical abuse of students, intimidation of students and school staff, destruction of school property, and failure to perform required academic activities.

[¶ 3.] The facts leading up to and around the time of the murder are relatively clear.   On January 14, 1996, at about midnight, the Pierre taxicab dispatcher received a call requesting a ride from Buhl’s Laundry.
When the cabdriver arrived, she was met by Jensen and his friend, sixteen-year-old Shawn Springer.   Jensen entered the passenger door and slid all the way across to a position directly behind the cabdriver while Springer sat in the front seat.   At the request of the passengers, the driver took them to the Steamboat Apartments-a distance of two blocks.   Once there, Springer exited the cab and entered the apartments, leaving Jensen in the cab sitting directly behind the driver.   Because Jensen’s seating location was making the cabdrive uncomfortable, the cabdriver turned around to make conversation with
Jensen.   However, he was uncommunicative.   When Springer returned, he told the cabdriver to take them to a restaurant called the Happy Chef-a distance of two blocks.   On the way, Springer asked if anyone had ever stolen or tried to steal the cab money bag.   The cabdriver responded that if anyone did try to steal it, they could have it, as it only contained thirty dollars.   Finally, the boys exited the cab at the Happy Chef, ending their ride about a block from where they met the cab in the first place.   This sequence of events was later pointed to by the prosecution as a kind of “dry run” before the actual robbery and murder that would take place twelve days later.

[¶ 4.] On January 21, 1996, at around 2 p.m., Jensen, his older sister, and Springer entered a friend’s apartment with the intention of stealing money which they thought might be there. Jensen and his sister had been in the apartment before and knew from their prior invitations that the door would be unlocked. Once inside the unlocked apartment, the group stole seventy to eighty dollars, a necklace, a handgun and a shotgun. The handgun turned out to be the weapon that would be used to kill the taxicab driver five days later.

[¶ 5.] On January 26, 1996, at approximately 7 p.m., Springer called a friend of Jensen’s sister to get permission to come over with his dog,
which the friend consented to allow.   Right after this conversation, Jensen came on the phone and secured permission from the friend to borrow a bandanna or handkerchief. Jensen and Springer then departed for the friend’s house, arriving between 7:30 and 8:30 p.m.

[¶ 6.] Once there, Jensen went to a back bedroom to get a compact disc.   Because it took so long and because recently money had been missing from the house, the friend went to the back bedroom to check on Jensen.
The friend then discovered that Jensen was carrying a gun in his pocket.
This was the same gun that Jensen had stolen five days earlier.

[¶ 7.] Eventually, Jensen showed the gun to the friend along with two or three ammunition clips.   The friend then suggested that Jensen leave the gun in the house for safekeeping and Jensen returned to the bedroom, ostensibly to do so.

[¶ 8.] After a while, the friend, Springer, and Jensen went to a truck stop, approximately three blocks away, to get some things. Although it was bitterly cold, none of the three wore anything over their faces, including Jensen, who had previously asked to borrow the bandanna.

[¶ 11.] When the cabdriver, Michael Hare, arrived at the Days Inn, there were no passengers in sight. A little later, Hare noticed Springer and Jensen coming from the back of the Days Inn. They entered the cab and
directed Hare to take them to Fort Pierre.

[¶ 12.] Eventually, Springer and Jensen had directed Hare to take them down a gravel road near Fort Pierre where the cab stopped. At this same time, the dispatcher was trying to call Hare’s cellular phone. Hare did not directly respond to her call, but the dispatcher could hear over the cell phone Hare say, “That’s all I have is thirty bucks. Take it. Take it all.”
The dispatcher then heard Springer say, “That ain’t all you got.” Then Jensen and Springer could be heard to demand “everything.” Hare replied, “That’s all I have. They only give us thirty bucks. You can have it.   Take it, take it all.”

[¶ 13.] Jensen got out of the cab with his gun drawn and ordered Hare to exit the vehicle. Shortly thereafter, Jensen shot Hare in the chest with the handgun Jensen had previously stolen. Hare fell down and yelled, “Please God, don’t kill me.”   Then, Jensen approached Hare and shot him once more on each side of the head, killing him.

[¶ 14.] Jensen then grabbed Hare’s billfold and other items, which had been set on the cab’s hood, and jumped into the cab’s passenger seat. Springer had already sat down in the driver’s seat and he proceeded to drive the car farther down the road as soon as Jensen had entered it. Soon after this, they turned around and were headed back to the main road when they met a police car. The officer had been alerted to the robbery by the dispatcher and, on meeting the cab, turned around and gave chase. Springer drove the cab too fast for the wintry conditions and missed the turn onto the main road. The cab came to rest in a snowbank and Springer’s efforts at spinning the wheels to get the cab to move were fruitless.

[¶ 15.] Officers were on the scene within seconds. Jensen and Springer departed the cab as the officers approached. When asked questions by the officers at the scene, Jensen was less than truthful in his responses.
He denied that there was a gun, but the gun was found in the snow next to the passenger door of the cab.   When asked where the taxicab driver was, Jensen said they had dropped him off in town.   When searched, Jensen had $36.48 in his pocket.

[¶ 16.] Later, Jensen was transferred to the Juvenile Corrections Center in Rapid City. While there, Jensen bragged to the other juveniles in his holding area that he had killed a taxi driver by shooting him three times, and that the robbery and killing were planned. Jensen related the story of his cold-blooded execution-style murder in a calm and unfeeling manner, as described in the testimony of one of the other juveniles at the center.

[¶ 17.] On January 29, 1996, a motion was filed to transfer Jensen, who was only fourteen at the time he shot Michael Hare, to adult court. After a week-long hearing, the motion was granted. Following a jury trial held from September 23 through October 4, 1996, he was found guilty of first-degree murder, among other charges, and sentenced to life in prison.

A South Dakota judge has upheld the 261-year prison sentence given to a Minnesota man who was 16 when he was involved in the 1996 kidnapping and murder of a Pierre taxicab driver.

Shawn Cameron Springer, who is now 34, pleaded guilty in 1996 to kidnapping for his role in the robbery and killing of Michael Hare.

Springer will be eligible for parole in 2029, but there is no guarantee he will be released then. He argued his 261-year prison sentence amounts to a life sentence in practice, so it would be struck down. He asked to be resentenced.

But after a brief hearing, Circuit Judge Kathleen Trandahl refused to set aside Springer’s sentence, saying it was legal.