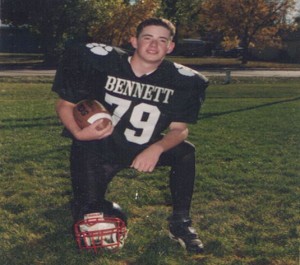 In the fall of 1996 Matthew Foley was, in many ways, a typical 16-year-old boy.  A Junior at Bennett (Colorado) High School, he loved cars, playing sports and hanging out with his friends.  He was starting to think about his future and dreamed of attending Notre Dame University and becoming a sports writer.

The things that made Matthew truly special, though, are things not normally associated with typical 16-year-old boys.  Instead of rebelling against his family or being embarrassed by them, Matthew truly loved his family.  His best friends in the world were his parents, Gail and Wayne and his grandpa, Stub.  Wayne coached him in baseball and they even built a full baseball diamond at the house to play.  He was a regular golf and pool partner with Stub and the two had been inseparable as long as anyone could remember.  Matthew’s kindness wasn’t limited to his family, though, as he always had a friendly smile and time to spare for anyone in need be it friend, family or total stranger.

Matthew was on his way into growing into a decent, honest and caring man.  Unfortunately, he never got that chance.  On November 21, 1996, he found himself in the most terrifying situation of his young life.  He was robbed at gunpoint by a schoolmate who was a few months shy of his 18th birthday.  The guy holding the gun, Trevor Jones, was everything Matthew wasn’t.  By his own admission he was a drug-user and “gangsta rap” fan who was infatuated with “thug culture” and cared more about being feared than respected.  He learned quickly that holding a gun was a quick way to get what he wanted and to instill that fear in others.  On that night he decided to escalate that fear one step further.  So, after he took Matthew’s money and started to walk away he stopped, turned and shot Matthew point-blank, killing him.  He used the $100 he stole from Matthew to go out to dinner and buy some cigarettes.

Given the depravity of his crime, his prior run-ins with the law and his impending 18th birthday, Trevor was tried as an adult.  Since Matthew’s murder occurred during the commission of a robbery, it was considered “felony murder” and Trevor’s conviction carried a mandatory sentence of life without parole.

After his incarceration Trevor was able to see the “thug life” he so desperately coveted up close and personal.  It was more than enough to make him decide that it wasn’t everything he hoped it would be and now he wants another chance at the life he squandered.  He makes regular appearances in the press blaming the pot he smoked or the music he listened to for his actions.  His family cries about the “loss” of their son and brother while he is able to walk in the sunshine, talk to his family and even learn foreign languages.

Meanwhile, Matthew’s family is left with only the memory of a remarkable young man who had the whole world in front of him.  They are continuously tortured and taunted with the threat of “clemency” for the man who was justly sentenced to spend the rest of his life in prison for Matthew’s murder.  They have been characterized as “vengeful” for wanting to see Matthew’s killer serve the sentence he was given at the conclusion of a fair trial.

Undaunted, they have established the Matthew Foley Scholarship Fund which has awarded 22 scholarships.  The scholarship fund helps to ensure that Matthew’s legacy and memory will live on well beyond his killer’s well-orchestrated public relations campaign and serves as a reminder of the remarkable son, grandson, cousin and friend who was so recklessly and callously taken from us.