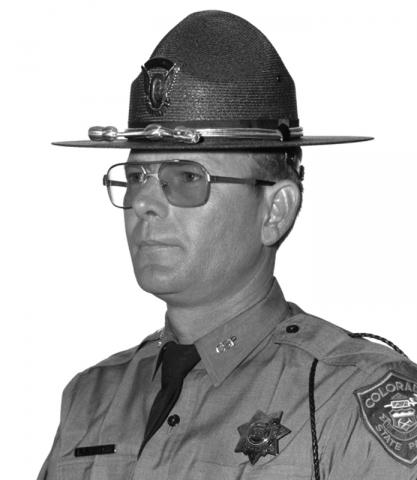 Police Chief Son Dave Wohlers: “Tried as an adult, do the time as an adult”

Idaho Springs Police Chief Dave Wohlers keeps his father’s service weapon in a wooden box on a shelf in his office.

It’s the gun his father never had a chance to unholster and point at his attackers. And it sits beneath pictures of the two grandsons he never had the chance to meet.

As a tribute to his memory, each of the boys was given Lyle Wohlers’ first name as their middle name.

David Lyle Wohlers and Jake Lyle Wohlers will know their grandfather only through their father’s stories. About how he loved the outdoors. How he was the best man at their parents’ wedding. And how he would have loved them.

Lyle Wohlers, a Colorado state trooper, was shot in the head during a traffic stop near Georgetown in 1992. As he lay dying, his son, then an Idaho Springs police sergeant, arrived at the crime scene. Dave Wohlers, the third responder, knew his father wasn’t going to make it.

“I’ve been around enough gunshot victims that I knew it was fatal,” he said.

Lyle Wohlers died the next day, on his 31st wedding anniversary. The last thing he had done before his death was buy his wife an anniversary card.

Two 15-year-olds – Marcus Fernandez and T.J. White – were charged in his killing.

“I really started wondering what 15-year-olds were doing, what they were thinking,” Dave Wohlers said. “It was shocking that 15-year-olds could commit that crime and have no remorse.”

Fernandez, the triggerman, went away for life without the chance of parole and is serving his sentence at the Colorado State Penitentiary, which houses the most violent and unruly inmates. They are locked down 23 hours a day and cannot have face-to-face interviews with the media.

White served 11 years in Department of Corrections custody before being released in February. Four months later, he was pulled over for speeding in Douglas County, according to court records. A check of court records found no criminal cases against him. His last known address was Pueblo.

Dave Wohlers – an only child – consistently fought to keep both Fernandez and White behind bars, testifying before the legislature, voicing his opinion at parole hearings and speaking publicly at every step of the legal process.

He said he’s satisfied with Fernandez’s sentence. White’s, on the other hand, is “an insult to the law enforcement profession,” Wohlers said.

His father’s murder has given him a unique insight into the emotions faced by victims’ families, he said.

“You belong to a special fraternity of people who unfortunately have to see it from that side,” Wohlers said. “There’s not a day that goes by that I don’t think of him.

“All of my memories are fond memories. I don’t let (his death) consume me with hatred or animosity toward anyone. You can’t be consumed by your grief or you’ll self-destruct.”

Yet he and other victims’ families, including those interviewed for this series, say they will stand strong behind current laws that keep their loved ones’ killers locked up.

They’ll oppose a second run at legislation aimed at allowing the possibility of parole for juveniles convicted of first-degree murder. Such a bill failed in this year’s legislative session.

“I think if you’re prosecuted as an adult, you should serve adult time,” Wohlers said. “That should not be tinkered with.”

Trooper Lyle Wohlers was shot during a traffic stop of two juveniles on I-70 near Georgetown. During the stop he requested backup but was shot by one of the suspects before backup arrived.

The two suspects were apprehended and tried as adults. The shooter was sentenced to life without the possibility of parole and the accomplice was sentenced to 32 years but was released after serving 11 years.

Trooper Wohlers had served with the Colorado State Patrol for 26 years. He is survived by his wife and son. His son became the chief of police in Idaho Springs, Colorado.