This heroic and promising young Chicago star gave his life to protect a girl seated behind him on a school bus when a gang shooting broke out on the bus. Blair’s father, Ron is an articulate and dedicated Chicago Police officer, and his mother Annette Nance-Holt is a prominent respected Chicago Police Fire Department Captain who has dedicated herself to helping other families like hers.

Blair was their only child, a very good person with a bright future. But in the finest tradition of the the Biblical words “Greater love hath no man than this – that a man lay down his life for a friend,” Blair Holt personified the greatest love any person could ever have. He was only 16 when his life was cut short.

Then candidate Barack Obama, while running for the Presidency, spoke often on the campaign trail about his neighbor Blair Holt and what this young man’s murder and heroic actions to save his classmate meant for our nation.

And Congressman Bobby Rush has introduced in Congress the Blair Holt Act, which would require licensing and registration of all firearms nationally.

And this case typifies the many victims of violent teens who are serving a sentence that is effectively life, but not officially life. All the work NOVJL does to advocate for common sense sentencing, and victims rights in all matters pertaining to their cases, helps families of victims beyond just the few cases of “official” JLWOP.

The Holt family continues to work to prevent violence. See about some of their work at www.purposeoverpain.org. 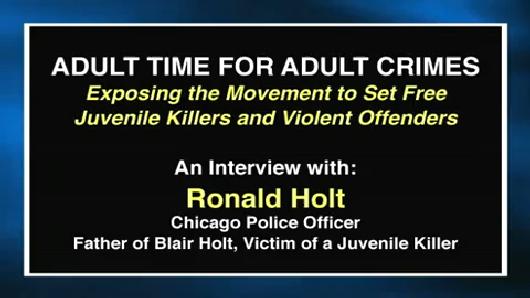