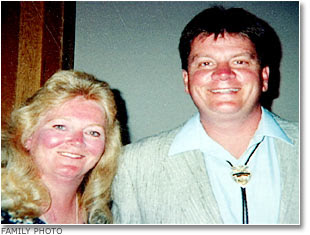 Meet Alan and Diane Johnson . . .a happily married husband and wife from Idaho with 2 children.

Their lives came to a brutal and tragic end on September 2, 2003. When police arrived at the home they found, quote one officer, “There was blood and hair on the carpet. It was on the ceiling. It was on all the walls. There was part of a skull cap in the hallway.” They had been shot to death in their beds with a Winchester Rifle. Alan Johnson was shot in the chest, while Diane was shot in the head. Their killer leaving their bedroom a bloody testament to the rage it took to commit this crime.

The individual sentenced to 2 life terms in prison for killing this couple was 16 at the time of the crimes. She is a Juvenile offender serving a life sentence. She is also the daughter of these victims. She had a dispute over her personal life, that police say led her to cold blooded murder.

Police found her pink bath robe along with gloves in the trash while investigating the crime. After this ‘child’ had shot her parents point blank, she hid this evidence in the trash. Family members described her as upset that police had cut her nails after the murder. She was fixated on getting her nails done for the funeral service, rather than grieving the murders.

This family has lost two of its members to murder, and then had to see another sentenced to life in prison. At the time of the sentencing the family told the media that they were satisfied that a life sentence without parole was appropriate for the crime. If there was a change to retrospective sentencing of juvenile offenders, it is possible that this family would have to rip open all of these wounds and revisit this gruesome and troubling part of their lives.

From the Heritage Foundation’s Foundry Blog:

Summary
Using a hunting rifle, Sarah Johnson killed her parents after they grounded her for attempting to spend the night with her older boyfriend. She shot her sleeping mother in the head and her father as he stepped out of the shower.

Facts
Alan and Diana Johnson lived in the small town of Bellevue, Idaho. Alan was a co-owner of a successful landscaping company, and Diana worked for a financial firm. They had a son, a daughter, and a nice house on a spacious two-acre parcel of land.

Their daughter Sarah Johnson attended Wood River High School. She fell in love with 19-year-old Bruno Santos, a former high school classmate and illegal alien who had had brushes with the law and was rumored to be involved with illegal drugs.

One Friday, Johnson told her parents that she was going to spend the night at a friend’s house. Her mother called the friend’s house and discovered that Sarah was not there. The parents guessed that their daughter was most likely with Santos.

Alan Johnson drove over to Santos’s house and found his daughter there. He spoke with Santos’s mother and then drove his daughter home. He grounded her for the weekend.

Just after 6 a.m. on September 2, 2003, a few days after she had been grounded, Sarah Johnson entered her parents’ bedroom armed with a Winchester .264 Magnum rifle. Her father was in the shower, and her mother was still asleep. Johnson placed the end of the rifle on her mother’s head and pulled the trigger. She then walked toward the master bathroom and saw her father coming out of the shower. She shot him once through the chest at a distance of about three feet.

Alan fell to the floor and then stood and walked toward the side of the bed where his wife usually slept. He felt for her and then collapsed. Neighbors who heard the gunshots called 911. Sarah Johnson exited the house and ran down the street, screaming that someone had shot her parents.

While Sarah Johnson told police a number of different stories about what she witnessed the morning of the murders, the evidence against her was overwhelming. There had been no forced entry to the home. Crime scene officers found a pink robe in the trash, inside of which they found a leather glove and a latex glove. Tests of the robe revealed biological material from the defendant and her parents. Testing of the leather glove revealed gunshot residue, and Sarah Johnson’s DNA was found inside the latex glove. The matching leather glove was found in Sarah’s bedroom, and the rifle was found in the master bedroom. The Winchester rifle was usually stored in the family’s guest house, where Sarah had spent the weekend after being grounded.

According to prosecutors, Johnson committed the murders because she was fearful that her parents were going to turn in Santos for statutory rape and have him deported. There was additional evidence that the defendant murdered her parents to get their money so that she and Santos could go away together.