Welcome to the National Organization of Victims of Juvenile Murderers NOVJM

We are the loved ones of those who were murdered by juveniles. We formed NOVJM for the purpose of supporting and informing each other. Our organization takes no specific stance on what the criminal sentences for these offenders should be. We are a victim support and information organization. We do not speak for victims, who are as diverse in their views as the murder cases in their families. Cases and victims’ views vary widely, and offenders’ sentences are determined by the criminal justice system that has been established in law by our society, not by victims’ families. We exist to provide support and information for those who have lost loved ones to teen killers. The younger age of the offenders in our cases present unique legal issues for murder victims’ family members. We support the rights of individual loved ones of murder victims to be heard in their cases. They should speak for themselves.

Though we do not take positions on the sentences that specific offenders should receive, many of us recognize that life sentences may be necessary for the most dangerous offenders who may always remain so due to mental health or other reasons, and who always would pose a risk to public safety. See our pages on Dangerous Early Release and Research on Juvenile Criminal Recidivism. Also, see our page on Current Legislation.

We stand for victims’ rights, and specifically, the rights of all victims’ family members to be heard and participate in their cases as they choose. We support having strong and enforceable rights for victims in every criminal justice process. And we know that victims’ rights in no way contradict the important constitutional rights that the accused and all offenders enjoy in our nation. We support full constitutional rights for both victims and offenders. These rights are not in conflict with each other. Nor are victims’ rights and rights of the accused in some sort of competition. We can have fully realized victims’ rights AND fully realized rights of the accused in our American criminal justice system. Both. They do not compete – they are about separate things.

NOVJM does stand for truth-telling in criminal cases involving juvenile offenders. In the frenzy of well-funded advocacy for juvenile offenders in recent years, the truth about these murderers has too often been minimized, or outright lied about. See Lies About Specific Cases.

We do take a stand that devastated victims’ families deserve at some point legal finality in their cases. Too many of us have had to spend much of the rest of our lives constantly having to re-engage with the people who destroyed their lives by murdering their loved ones. We urge courts, parole boards, and legislators everywhere to balance the justice process with a profound regard for the literal torture of re-traumatization that victims’ loved ones endure every single time anything related to the murder cases are re-opened and re-enter their lives. Resources also need to be devoted to support and inform victims’ families during these trying legal proceedings.

Loved ones of those killed by teens should join our NOVJM Facebook Group for the most up-to-date news and information, and to chat with each other. You can also like our Facebook page.

Read more About Us and What We Believe.

Photo: Officer Larry Lasater of Pittsburgh, California, Killed in the Line of Duty by a Teenager Sentenced to Life

NOVJM Leaders can be reached at novjm@aol.com. Those interested in serving in leadership positions at NOVJM are most welcome and encouraged to send us emails expressing that interest. 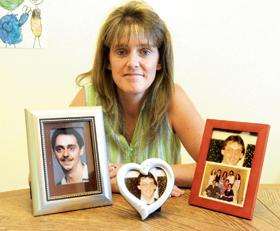 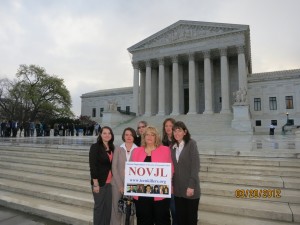 Photo: NOVJM murder victim family members of those killed by teens from all over the nation at the United States Supreme Court during the argument of Miller v Alabama in 2012, a case that could free their loved ones’ murderers.

NOVJM, formerly NOVJL, exists to support and inform families and friends of victims killed by offenders under age 18. We found it necessary to organize ourselves, given the significant and well-funded advocacy effort that exists for those offenders that gives no information or support to the families of the victims of their crimes. NOVJM is devoted to victims’ rights and sound public policy regarding teens who kill.

We began as NOVJL (National Organization of Victims of Juvenile Lifers), founded in 2006. We were a small group of victims’ families who were very concerned about the complete lack of information available to other victims’ families about the staggering multi-million dollar campaign to free our loved ones’ killers.

In 2014 we changed our name to NOVJM, reflecting our significantly growing membership that included many victims’ families whose loved ones were murdered by juvenile offenders who were not sentenced to life in prison. NOVJM today reflects hundreds of voices of victims’ families from all over the nation.

We are an all-volunteer organization that works to provide information and emotional support to fellow victims who have lost loved ones to juvenile killers. We hope to bring victims’ voices to the public policy debate about juvenile offenders, while stunning sums of money are being spent by advocates of these offenders to reduce or even end their prison sentences. At first we believed that these juvenile criminal advocates would care about victim outreach and support, but after years of effort at bridge building on our part, they have refused to share even basic information about their campaigns with us. Instead, they lavish all their resources on convicted murderers.

How juvenile offenders are sentenced is the subject of a significant public policy debate in which our main concern is that victims’ voices are heard. We are also concerned with the significant financial resources devoted to helping these offenders, while virtually no help, information, or support of any kind is being offered to victims’ families who have been horrifically traumatized by the brutal murders of their loved ones. We are heartbroken each time we hear of victims’ families who had no idea that there was an effort underway to free their loved ones’ murderers (until after it was too late to be heard in the process!)

This website tells the true stories of those murdered by teens. These truths are especially important in the face of the willingness of juvenile criminal advocates to minimize, misrepresent, and even lie about the facts of these horrible crimes in their attempts to portray these killers as having diminished culpability. We know there is much to discuss in public policy regarding teens who kill, but good decisions can only be made when the full facts are known. We know that some offenders are more or less culpable depending on the individual facts and circumstances. But LIGHT is a great “disinfectant”. Blurring the facts of these crimes does not improve the public policy discussion.

We understand the controversy around the issue of teens who kill and the destruction left in the aftermath of those crimes – we are LIVING it. We understand the powerful feelings that the youthful ages of these offenders create. We understand that there are problems in our criminal justice system, as with any human institution.  We often do not understand, however, the incredible focus on helping these offenders with no compassion for or attention to the victims they created. The behavior of juvenile justice reform advocates towards victims’ families during their national effort to change laws and policies has been poor, to say the least. These offenders have committed some of the most horrific murders imaginable. We miss our loved ones horribly.

Advocates of the offenders who murdered our loved ones must consider the crimes committed by those they are advocating for. They must consider the pain the victims of these criminals suffer and how that pain is exacerbated by the re-opening of the cases.

Mistakes on this site?
This page is webmastered by victim volunteers. We do our best to gather accurate information. Please email us at NOVJM@aol.com with any edits, corrections, or suggestions. Thank you.

“Victims don’t want vengeance, they want healing: but there is no healing until justice is done.  And justice is never ‘done’ as long as the sentence can be undone.”  ~NOVJM member

“Those under 18 years old may as a general matter have diminished culpability relative to adults who commit the same crimes, but that DOES NOT mean their culpability is always insufficient to justify a life sentence.”
~Chief Justice John Roberts, Concurring Opinion, Graham v. Florida, 2010

“Daniels and several members of his family begged officials to lock up Markus Evans for an extended time . . . [but after Evans only served 14 months in juvenile custody for shooting and almost murdering Daniels, his 7th violent felony by age 15] Evans was released at age 17 with no supervision . . . Evans reported to police he was so angry that he robbed a liquor store and shot the clerk . . .17 year old Jonoshia Alexander . . .was found dead in the alley, shot in the back of her head.”
~Milwaukee Journal Sentinel, May 29, 2011