Dec. 2013 – Inmate attempts to change the Pennsylvania Supreme Court’s ruling against the retroactivity of the Miller v Alabama ruling ending mandatory life without parole sentences for teen killers. These kinds of challenges by offenders are common and to be expected, not likely to succeed. Ultimately the retroactivity issue may end up back in the U.S. Supreme Court.

Teen killers in PA continue to push for resentencing and the Third Circuit grants retroactive sentencing appeals to three offenders.

August 2013 – The first PA teen killer serving life for murder is re-sentenced in the wake of the Miller v Alabama Supreme Court ruling in Pennsylvania, the state with the largest population of JLWOP cases. He receives a 60 years-to-life sentence, still an extremely and appropriately long sentence, raising the question – is all this agony, expense and hassle WORTH this?

The offender advocates who have spent hundreds of millions of dollars in this national campaign to free 1300 teen offenders serving life for murder have been putting victims families through a living hell during their campaign. And costing over-burdened state budgets even more money in extra legal proceedings for these offenders who already received full legal due process. All so they could give them a “second chance” (remembering many of them were already hardened criminals with a lengthy criminal record at the time of their offense at age 16 or 16).

But we have been predicting, as we saw in Florida after the Graham ruling, that the new sentences they received would not be much shorter. The reason is because they have already been convicted of first degree heinous murders. Courts are still going to give them appropriately longest-possible sentences.

All this money. All this hardship on victims families. All this false hope given to offenders and their families. All so they can serve a 60 year sentence instead of a life sentence. This is the REAL cruel and unusual punishment.

March 26, 2013 The Pennsylvania Supreme Court issues a ruling  in line with our view of the Miller v Alabama ruling – that under the Teague Rule it is only applicable to those cases currently open under direct appeal, keeping life without parole sentences in place but opening past cases to some limited opportunities for re-sentencing for those offenders still appealing their cases.

Also, as has been done nationally many times, claims by Human Rights Watch and other offender advocates about how many so-called Juvenile Lifers in Pennsylvania are proven to be exaggerations: “The number of juveniles who were convicted of murder and are serving life sentences in four Western Pennsylvania counties, plus Philadelphia, where 55 percent of such cases in the state occurred:
Armstrong: 0
Butler: 2
Westmoreland: 2
Allegheny: 40
Philadelphia: 207
Statewide: 373 (as of June 2012)”
Source: Pennsylvania Department of Corrections
Read more: http://triblive.com/state/pennsylvania/3750940-74/decision-court-juveniles#ixzz2PQ6Kf4uA

November 26, 2012 A Pennsylvania Court ruling agrees that the Miller Supreme Court ruling against mandatory life sentences for teen killers is NOT retroactive.  Download their ruling here.

The PA Supreme court is set to hear a case in September appealing based on the recent SCOTUS decision against mandatory life sentences for teens who kill. This has been planned for a while:
Appeal Docket Sheet  Docket Number: 79 MAP  2009
Page 1 of 7  August 3, 2012

Hearings held at the Pennsylvania Capitol allowed public testimony on how Pennsylvania should modify their laws to comply with the recent Supreme Court ruling limiting juvenile life without parole sentences to when the Judges have options where they can consider the individual case, including the age of the offender. In other words, JLWOP can not be mandatory.

Read important legal analysis submitted as testimony on this issue to the PA legislature from the office of the former US Attorney General.

Contact Bobbi Jamriska for more information and to get involved in the important work victims will have to do in the months ahead to be a part of the changes in the laws following the Supreme Court ruling. 412-760-4921

Here is her report from those hearings:

On Thursday, July 12, the PA Senate Judiciary committee held hearings on the
required changes to PA state law that mandates Life for first and second degree murder sentences for juveniles. There were three topics
covered:
1.) Are the existing sentences subject to re-sentencing.
2.) If there is a need to apply retroactively, how will that occur?
3.) What should the new law be, for all new cases?

There were NO members of the committee, other than Senator Greenleaf present at the hearings.

The agenda included both sides of law, prosecutors and defense attorneys, a few victims, and our state victims advocate, and as usual a whole host of groups and individuals in support of re-sentencing and releasing the killers. I’ve attached a copy of the agenda, and some testimony.

The NY Times reporter, Ethan, was also there, not sure when he finishes his
story. Things I heard, that stick with me:

The biggest fight here is whether the existing sentences are indeed part of the
ruling and need re-sentenced. The defense folks all feel that it is absurd to
question this, the prosecutors and victims feel that there should be no changes
to existing sentences. The suggestions by advocates for the offenders on how to change the law, in some cases were downright scary. Some of the suggestions included: A 10 year minimum sentence, with yearly parole hearings after, A 30 year minimum with yearly hearings, a 40 year minimum with a hearing every five years after. (One witness suggested that since Charles Manson gets parole hearings and doesn’t get out, there is no harm in having a hearing.) The
suggestions for how to act on retroactive sentences, was even more disturbing.
One of the defense attorneys testifying, suggested that, all 1st degree sentences be reduced to 2nd degree and resentenced on that lesser crime, and that all 2nd degree cases be reduced to the felony committed during the homicide, and the sentencing reflect that felony, and not the homicide.

Continuing themes included : Brain science, disparity in the number of folks serving here in PA (480, 387, 600+) depending on the speaker.

My sense is that Greenleaf, has been aware of this issue for some time and wants to get this right. The speed with which he held this hearing, shows he is concerned with the issue. The lack of participation by his colleagues, shows this is his thing. He asked many good questions about what other states do, what the Supreme Court’s not speaking to retroactive sentences means, and some other great discussions. My concern is, where he is getting his information. He asked a Juvenile Justice person to submit further info on sentencing in other states, perhaps we could send him something as well

I have no idea how this is all going to play out. He’s agreed to keep us involved,
so let’s hope that is the case. The victim’s advocate here in PA, is doing a
great job of keeping us at the table.

For those of you who may be heading to hearings soon, good luck. It’s rough for sure. I haven’t really been sleeping, eating, or functioning properly since
SCOTUS announcement and I’m sure I’m not alone. Good luck everyone.

According to offender advocates, Pennsylvania has the highest number of cases of teen killers sentenced to life in the nation. We also hear claims that some of the youngest offenders in the nation sentenced to life as adults may come from Pennsylvania, and that mandatory sentencing is farther reaching in Pennsylvania than in other states.  We certainly know that a robust public policy discussion, with all the FACTS and STAKEHOLDERS (including victims) fully included is the only way for the state to proceed to discuss these life and death decisions.

We do know that some of the worst murders in the state’s history were committed by teen offenders now serving life as adults.

See the right sidebar of this website for a link to NOVJL’s BLOG that is run by a Pennsylvania victim family member, Bobbi Jamriska. In her testimony before the Pennsylvania state legislature, news coverage reported :

“Bobbi Jamriska, 38, of Shaler disagreed [with the proposed legislation].

“There are bad seeds, individuals who are not fit to be part of a lawful functioning society,” said Jamriska, who spoke on behalf of the National Organization of Victims of Juvenile Lifers. “There has to be within the legal system a means to keep these individuals from doing more harm to the innocent.”

Life sentences without parole do not provide closure, but they do ensure that convicted killers cannot strike again, said Carol Schouwe and others opposing the bill.

“Supporting this bill is giving permission for juveniles to commit murder without the dire consequence of spending their lives behind bars,” Schouwe said.

Pictured below: In September 2008, Dawn Romig, mother of Danni Reese, who was brutally raped and murdered by a 17 year old, tried as an adult and sentenced to life in Pennsylvania, goes with her family and victim advocates to give testimony on JLWOP. 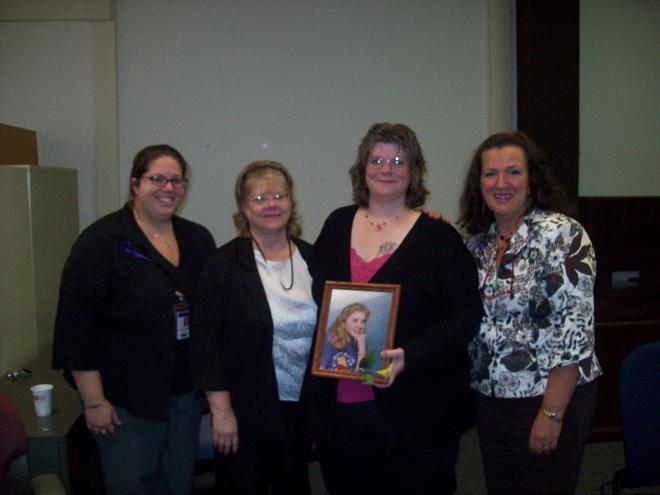 The hearings did include a few victims families who the wonderful PA victim advocate Carol Lavery and her staff worked hard to find. But they had almost no time, no notice except from us here at NOVJL and we had found it through Google alerts. No word to victims from Senator Greenleaf’s office before the hearings. Those victims that went to the effort to come and speak were verbally assaulted at the hearing and the Senator in the Chair did NOT silence them, thereby re-traumatizing even further these poor families present.

The hearings did include a few victims families who the wonderful PA victim advocate Carol Lavery and her staff worked hard to find. But they had almost no time, no notice except from us here at NOVJL and we had found it through Google alerts. No word to victims from Senator Greenleaf’s office before the hearings. Those victims that went to the effort to come and speak were verbally assaulted at the hearing and the Senator in the Chair did NOT silence them, thereby re-traumatizing even further these poor families present.

Download the text of a webchat between an NOVJL national board member and a Philadelphia area newspaper.

News coverage of the hearings here:

Below are links to testimony given at the Pennsylvania state capital on proposed legislation to retroactively undo juvenile life without parole sentences for teen killers. Ironically, just a week after these JLWOP hearings a PA parolee murders a police officer. The Governor of PA suspends ALL paroles pending investigation. The reason for this is an unmitigated tragedy. The reality politically though is a positive eye-opener. The dangers of paroled killers are painfully reminders of the importance of not using parole as their “solution” to JLWOP.

From the Office of the Victim Advocate (against HB 1999) TESTIMONY

From the Pennsylvania District Attorney’s Association (against): TESTIMONY

From Dawn Romig (against): TESTIMONY

From Cully Stimson (against): TESTIMONY

From Bradley Bridge (who did not testify, but is for HB1999):

From Anita Colon (for )

From Carol Lavery (against) TESTIMONY

From The Sentencing Project (for)

From the Juvenile Law Center (for)

From the Pennsylvania Prison Society (for)

From the National Organization of Victims of Juvenile Lifers (against) TESTIMONY